When I was young I never felt European. How could you when you come from the microcosm of Belfast? The Belfast poet, John Hewitt, described his identity as “Ulster, Irish, British and European,” but as a child brought up in the navel-gazing fulcrum of the Troubles, I was caught within the narrow confines of being Protestant and British. Division was our leitmotif with Belfast divided from itself and from the rest of the world. To this day, it’s a city full of interfaces, enclaves, peace walls, peace lines, and borders as if it never really evolved from the medieval moat or rath.

That’s not to say that I grew up small-minded and sheltered. My Dad was a merchant mariner, working for United Arab Shipping Company which struck me as incredibly exotic. My parents reinforced that internationalism by taking my brother and me on trips to Europe – to Madeira, to Brittany, and to Achill in the West of Ireland. In Brittany, my father told a pub landlord we were from Ireland, deliberately leaving out “Northern” to garner a friendlier response.

At ten I went on a school trip to Switzerland. We girls had a crush on the hotel-owner’s twelve-year-old son who boasted of his brilliance at French-kissing which to us seemed the height of European sophistication. We went in search of his bedroom one night only to be chased back down the corridor by his irate Swiss granny. I must admit I’ve always been a sucker for a Euro-accent. In the same way as my lips long to mimic the accent, they long to kiss the speaker.

As for the EU, all I learnt from the BBC was images of butter mountains and milk lakes, perpetual pictures of overproduction and waste. Being a seaman’s daughter, I also understood that the EU gave too many fishing rights to other countries in our seas. The EU ethos of being borderless seemed at loggerheads with our Protestant need for self-protection and our siege mentality. For us British, the fact that Spain aspired to regain sovereignty of Gibraltar meant there was a de facto danger in Europe. On the lighter side, I grew up watching the cheesy Eurovision Song Contest, supporting the UK, although I did quite fancy Johnny Logan who won it for Ireland in 1980.

America, not Europe, was our family’s dream. My grandfather had taken a ship from Magilligan Point to America in the late 1880s, and travelled round, hawking glassware and china on the trains. He eventually became wealthy but lost most of it in the Wall Street Crash and returned home, still yearning for America. I remember setting out to the US in my early twenties and bumping into an ex-teacher on the way who urged me to grab my opportunity out there and never come back. There was always this notion you could be more successful in America than Europe. For instance, I loved studying French and German at school but to a large degree it felt as though they were dead languages – nearly as dead as Latin. What was the point when English was the lingua franca of Europe?

Instead, I ended up teaching my own language across Europe. Firstly in Athens when I was twenty-two, and then later in Nancy, France, Prague, Warsaw, Opole, and Bydgoszcz. I could apply for a job teaching Business English on Friday and be in a new country by Monday, such was the demand. With or without the EU there will always be opportunities for us to export our language. I remember how in the late 1990s there was still a lot of snobbery from Western Europe about Eastern Europe. My French boyfriend in Nancy asked me why I wanted to teach in the Czech Republic as it was “a crap country”. The short story writer, Bridget O’Connor, said succinctly, ”Nightmare,” when I mentioned I was heading to Warsaw.

To me, one of the big negatives about Europe is the culture of apartments. I’m much happier in a house than an apartment. Footsteps and voices from an apartment above make me feel as lonely and abandoned as being buried alive in my own coffin, hearing the muffled thuds of dirt being thrown on top of me. Being alone doesn’t make me feel lonely; it’s being surrounded by people leading their own rowdy lives that makes me really feel alone.

Our conflict in Northern Ireland is a perpetual rerun of the European wars of religion, and it’s as if we’re trapped in some revolving portal of history. Sometimes it feels as if the Reformation only happened yesterday and it’s certain that if it hadn’t been for the Dutch King William of Orange, my family together with the whole Protestant plantation would have been ousted from Ireland. While I was writer-in-residence at the Irish College in Leuven last October, I met some Dutch people from Den Bosch who mentioned their traditional proverb, “Two religions on one pillow; there lies the devil in between,” reminding me of the dangers of Irish sectarianism.

Our European links run deeper than we think, coursing through our blood. My grandmother had Huguenot antecedents and my family’s blood was spilt in mainland Europe too when my great-uncle Brian, a navigator in World War II, was shot down on a bombing raid to Germany. Brian’s brother Raymond lost the use of his arm somewhere on a European battlefield and another great-uncle to all intents and purposes lost his lungs at the Somme in a gas attack, having to retire to his family farm, a whispery shadow of his former self.

In our family the European military links stretch back even further. The story goes that our great-grandmother discovered in her farmhouse attic a diary of a relative recounting his time as a soldier at the battle of Waterloo. My great-grandmother, deeming it worthless, threw it out. To think it would have been historical gold dust by now!

It’s odd to contemplate that if it wasn’t for the sacrifice by Protestant soldiers in Europe, the English might never have rewarded them with the formation of Northern Ireland. It’s important to mention the Northern Catholics who sacrificed themselves too. Not far from my street in East Belfast is Somme Drive, Thiepval Avenue, Picardy Avenue, Bapaume Avenue, and Hamel Drive attesting to World War I’s deep and lasting impact.

Nowadays, Europe means liberation to me. Switzerland and Belgium stand for euthanasia while Amsterdam represents the legalization of drugs. Although the etymology is hazy, Europe is believed to come from the Ancient Greek for “wide-faced” (Greek eurys“wide”, ops “face” or literally “eye”) which implies a breadth of views. The symbol of the EU is Europa who according to Greek mythology was a Phoenician princess, a derivation that would be wonderful if Europa symbolized female power, but unfortunately she was abducted by Zeus who changed himself into a bull and raped her. Such a story resonates all too aptly within the modern #MeToo era.

I think the real reason why the UK voted for Brexit is a perception that Germany aided by France rules the EU. It’s UK resentment over not being number one in Europe which, added to English nationalism, has led to the rupture. I have to admit I’m not in favour of the colonizing, neoliberal aspirations of the EU to expand further east but, unlike the English Brexit-voters, I’ve come to reject the simplicity of one single nationality. I’ve discovered the practical advantage of having two identities and two passports, British and Irish, and I can only see it as beneficial to extend my self-identity into a triple nationality – British, Irish and European. To quote Hewitt again, “Anyone who demeans any one part of me demeans me as a person.”

A small country like Northern Ireland can’t exist economically on its own, so we have to look for unity, whether that’s with a United Kingdom, a United Ireland, or a United Europe. Whatever the case, we will always have to look outwards. I began this piece by saying I didn’t feel European, but something changed for me in 2017. That autumn I put in a bid to write a play as part of Belfast and Derry/Londonderry’s application to become 2023 European Capital of Culture. Shortly afterwards, the application was scuppered due to Brexit, leaving me feel cut off and alone, nursing a strange sense of loss. The truth is I have never fully appreciated Europe until now when politics are at their most divisive, but it isn’t yet too late and it’s up to us writers to keep travelling and bringing us closer together. 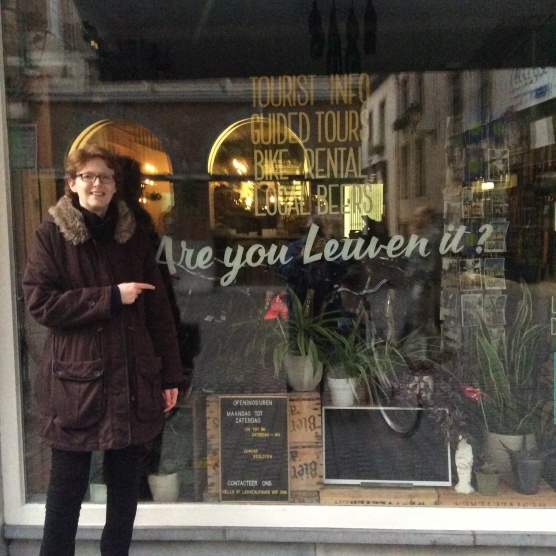